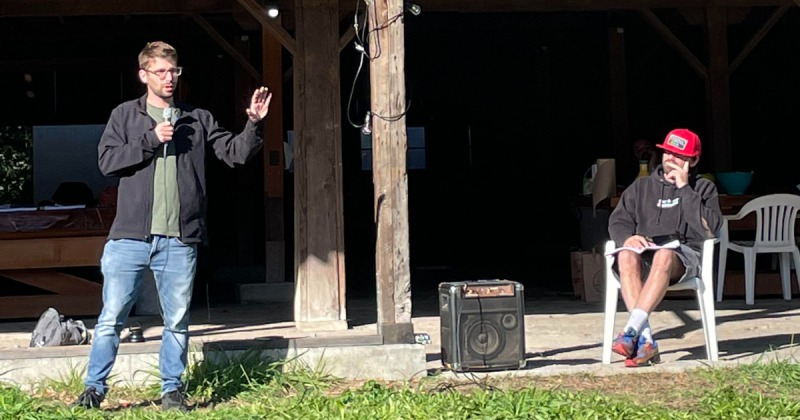 Ross Gordon of HCGA discusses policy with the crowd as Chris Anderson looks on. [Photo by Lisa Music]

On Sunday, November 21st, on a beautiful, sunny day, about 50 community members and cannabis insiders gathered at the Southern Humboldt Community Park in Garberville trying to figure out ways to survive the current cannabis market while saving the community at large.

The initial call to action, put out by Chris Anderson, CEO of Redwood Roots, Inc., a cannabis distributor in Benbow, was to discuss a march on Sacramento to protest an increase in cultivation tax, effective January 1st, 2022. However, Chris admitted he may have gotten ahead of himself after speaking to other industry insiders. Instead, he encouraged the cannabis community to come together to effect change where they can by banding together with already organized efforts. Chris believes the three main problems that the cannabis industry is facing is over-taxation, over-production and lack of retail.

Ross Gordon, Policy Director of the Humboldt County Growers Alliance (HCGA), acknowledges the community’s need to gather, “It’s obviously a really heavy time, and a really important time, to try to think about what we can do on a community level to try to make some change.”

The “offensive” cultivation tax increase, according to Ross, was built into Prop 64 as a yearly increase to account for inflation… “which is funny because the price of cannabis isn’t inflating, but our taxes are inflating.” He believes a lot of the challenges the community faces stem from Prop 64, the legal framework for cannabis legalization.